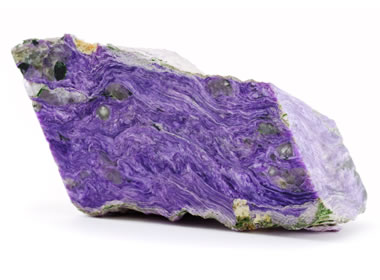 Charoitite Rough: A sawn piece of rock containing abundant charoite along with other minerals. These charoite-dominated rocks are known as charoitite. This specimen shows the typical color and interesting pattern of gem-grade material. It would be suitable for cutting cabochons and possibly for use in making a small sculpture. Image copyright iStockphoto / Gala_Kan.

Charoite is the name of a purple to violet silicate mineral with a striking appearance. Its vibrant purple color grabs a person's attention. Then, upon closer examination, the viewer discovers interesting banding, swirls, scales, or radial and parallel habits.

Many rocks that contain abundant charoite will accept a beautiful polish. As a result, high-quality pieces of charoite can be cut into spectacular purple cabochons, or used as an ornamental stone to veneer a delightful jewelry box. A pearly luster or chatoyance often increases the beauty of this gem.

Charoite is a rare mineral, found in commercial quantities only in a few small and closely spaced deposits in the Sakha Republic of eastern Russia. It received its name from the Chara River, which drains that geographic area. [1] 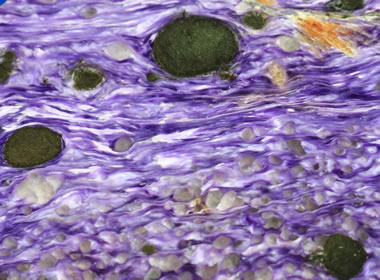 Charoitite: A photomicrograph of charoitite, a rock that contains charoite in intimate association with numerous other minerals and sedimentary grains that were part of the protolith (parent rock). Image copyright iStockphoto / jonnysek.

The charoitite of the Sirenevy Kamen ("purple stone") deposit of eastern Siberia is thought to have formed when an alkali syenite intrusion encountered a dolomite containing a significant amount of terrigenous clastic sediment. The result was a complex geochemical environment of hydrothermal metasomatism. [2]

Charoite is a complex silicate mineral. Published chemical compositions are in disagreement. We checked numerous references, and each one presented a different composition. The compositions reported below are from the Glossary of Geology [3], Mineralogical Magazine [4], and Mindat.org [1].

Determining a composition for this mineral might be difficult for two reasons: 1) well-formed crystals and specimens of pure charoite have not been found; and, 2) charoite is always intimately associated with and intergrown with numerous other minerals. 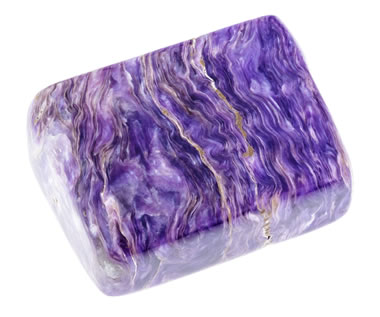 Polished Charoitite: A tumble-polished specimen of charoitite exhibiting a wavy banded structure. This is a gem-grade piece that could be used to make an attractive pendant or other item. Image copyright iStockphoto / KrimKate.

Charoite is only known from rocks that are either charoite-rich or charoite-dominated. The name used for these rocks is "charoitite". [5] Most people in the gem and lapidary trades simply refer to them as "charoite" and may not suspect that they are a rock which contains a variety of rare minerals. 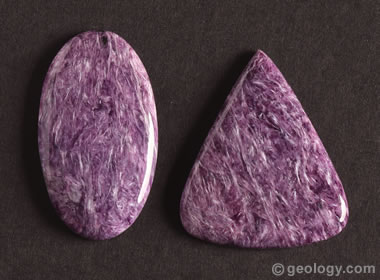 Rocks containing abundant charoite with a pleasing color and interesting pattern are often cut into gems or used as an ornamental stone. Charoite cabochons, beads, tumbled stones and other items made of high-quality material can sell for high prices. Charoite is also used to make small sculptures and small utilitarian items that include vases, spheres, goblets, desk sets, small boxes, and decorative tiles.

High-quality charoite rough and items made from charoite are not abundant in the marketplace because the material is rare, costly, not regularly mined, and much of what is produced is consumed in Russia.