The demand for rare earth elements has grown rapidly, but their occurrence in minable deposits is limited.

Rare Earth Element Production: This chart shows a history of rare earth element production, in metric tons of rare earth oxide equivalent, between 1950 and 2020. It clearly shows the United States' entry into the market in the mid-1960s when color television exploded demand. When China began selling rare earths at very low prices in the late 1980s and early 1990s, mines in the United States were forced to close because they could no longer make a profit. [1] When China cut exports in 2010, rare earth prices skyrocketed. That motivated new production in the United States, Australia, Russia, Thailand, Malaysia, and other countries. In 2018 production data in Burma / Myanmar became available and boosted the "others" category. Prior to 2018, some production from Burma / Myanmar may have been unreported. Graph by Geology.com using data from United States Geological Survey Mineral Commodity Summaries and other publications.

REE Periodic Table: The Rare Earth Elements are the 15 lanthanide series elements, plus yttrium. Scandium is found in most rare earth element deposits and is sometimes classified as a rare earth element. Image by Geology.com.

What Are Rare Earth Elements (REEs)?

Rare earth elements are a group of seventeen chemical elements that occur together in the periodic table (see image). The group consists of yttrium and the 15 lanthanide elements (lanthanum, cerium, praseodymium, neodymium, promethium, samarium, europium, gadolinium, terbium, dysprosium, holmium, erbium, thulium, ytterbium, and lutetium). Scandium is found in most rare earth element deposits and is sometimes classified as a rare earth element. The International Union of Pure and Applied Chemistry includes scandium in their rare earth element definition.

The rare earth elements are all metals, and the group is often referred to as the "rare earth metals." These metals have many similar properties, and that often causes them to be found together in geologic deposits. They are also referred to as "rare earth oxides" because many of them are typically sold as oxide compounds.

Rare earth metals and alloys that contain them are used in many devices that people use every day such as computer memory, DVDs, rechargeable batteries, cell phones, catalytic converters, magnets, fluorescent lighting and much more.

During the past twenty years, there has been an explosion in demand for many items that require rare earth metals. Twenty years ago very few people owned a mobile phone, but today over 5 billion people own a mobile device. [3] The use of rare earth elements in computers has grown almost as fast as cell phones.

Many rechargeable batteries are made with rare earth compounds. Demand for the batteries is being driven by demand for portable electronic devices such as cell phones, readers, portable computers, and cameras.

Rare earths are used as catalysts, phosphors, and polishing compounds. These are used for air pollution control, illuminated screens on electronic devices, and the polishing of optical-quality glass. All of these products are expected to experience rising demand.

Other substances can be substituted for rare earth elements in their most important uses; however, these substitutes are usually less effective and costly.

From the 1950s until the early 2000s, cerium oxide was a very popular lapidary polish. It was inexpensive and very effective. The recent price increases have almost eliminated the use of cerium oxide in rock tumbling and the lapidary arts. Other types of polish, such as aluminum oxide and titanium oxide, are now used in its place.

Are These Elements Really "Rare"?

Rare earth elements are not as "rare" as their name implies. Thulium and lutetium are the two least abundant rare earth elements - but they each have an average crustal abundance that is nearly 200 times greater than the crustal abundance of gold [1]. However, these metals are very difficult to mine because it is unusual to find them in concentrations high enough for economical extraction.

The most abundant rare earth elements are cerium, yttrium, lanthanum and neodymium [2]. They have average crustal abundances that are similar to commonly used industrial metals such as chromium, nickel, zinc, molybdenum, tin, tungsten, and lead [1]. Again, they are rarely found in extractable concentrations.

Before 1965 there was relatively little demand for rare earth elements. At that time, most of the world's supply was being produced from placer deposits in India and Brazil. In the 1950s, South Africa became the leading producer from rare earth bearing monazite deposits. At that time, the Mountain Pass Mine in California was producing minor amounts of rare earth oxides from a Precambrian carbonatite.

The demand for rare earth elements saw its first explosion in the mid-1960s, as the first color television sets were entering the market. Europium was the essential material for producing the color images. The Mountain Pass Mine began producing europium from bastnasite, which contained about 0.1% europium. This effort made the Mountain Pass Mine the largest rare earth producer in the world and placed the United States as the leading producer.

At the same time, world demand was skyrocketing as rare earth metals were designed into a wide variety of defense, aviation, industrial, and consumer electronics products. China capitalized on its dominant position and began restricting exports and allowing rare earth oxide prices to rise to historic levels.

The Chinese dominance may have peaked in 2010 when they controlled about 95% of the world's rare earth production, and prices for many rare earth oxides had risen over 500% in just a few years. That was an awakening for rare earth consumers and miners throughout the world. Mining companies in the United States, Australia, Canada, and other countries began to reevaluate old rare earth prospects and explore for new ones.

This effort has resulted in a decline in the amounts of rare earth materials used in some types of magnets and a shift from rare earth lighting products to light-emitting diode technology. In the United States, the average consumption of rare earths per unit of manufactured product has decreased, but the demand for more products manufactured with rare earth elements has increased. The result has been higher consumption.

China Buying Resources Outside of China

Chinese companies have been purchasing rare earth resources in other countries. In 2009 China Non-Ferrous Metal Mining Company bought a majority stake in Lynas Corporation, an Australian company that has one of the highest outputs of rare earth elements outside of China. They also purchased the Baluba Mine in Zambia.

Rare Earth Production Outside of China

Mines in Australia began producing rare earth oxides in 2011. In 2012 and 2013 they were supplying about 2% to 3% of world production. In 2012 the Mountain Pass Mine came back into production, and the United States produced about 4% of the world's rare earth elements in 2013. Production in Brazil, Malaysia, Russia, Thailand and Vietnam continued or increased.

New mineral resource assessments conducted by the United States Geological Survey identified significant resources outside of China. Although China is the world leader in rare earth production, they only control about 36% of the world's reserves. This provides an opportunity for other countries to become important producers now that China is not selling rare earth materials below the cost of production.

REE production chart: This chart shows China's dominance in the production of rare earth elements between 1994 and 2020. The United States was a significant producer through the 1990s, but low-priced materials sold by China forced mines in the United States and other countries out of operation. As China limited exports, and prices increased rapidly in 2009 and 2010, mines in Australia and the United States became active again. In 2018, data from Burma / Myanmar became available, causing an increase in production that may have been present but unreported prior to 2020. Graph by Geology.com using data from the United States Geological Survey.

Dangers of a Dominant World Producer

Supply and demand normally determine the market price of a commodity. As supplies shrink, prices go up. As prices go higher, those who control the supply are tempted to sell. Mining companies see high prices as an opportunity and attempt to develop new sources of supply.

With rare earth elements, the time between a mining company's decision to acquire a property and the start of production can be several years or longer. There is no fast way to open a new mining property.

If a single country controls almost all of the production and makes a firm decision not to export, then the entire supply of a commodity can be quickly cut off. That is a dangerous situation when new sources of supply take so long to develop.

In 2010 China significantly restricted their rare earth exports. That was done to ensure a supply of rare earths for domestic manufacturing and for environmental reasons. This shift by China triggered panic buying, and some rare earth prices shot up exponentially. In addition, Japan, the United States, and the European Union complained to the World Trade Organization about China's restrictive rare earth trade policies. 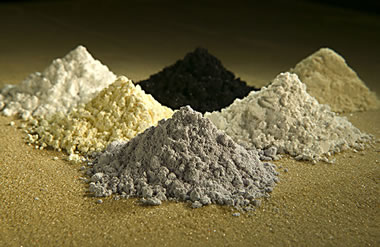 "Rare earths are relatively abundant in the Earth's crust, but discovered minable concentrations are less common than for most other ores. U.S. and world resources are contained primarily in bastnäsite and monazite. Bastnäsite deposits in China and the United States constitute the largest percentage of the world's rare-earth economic resources, while monazite deposits in Australia, Brazil, China, India, Malaysia, South Africa, Sri Lanka, Thailand, and the United States constitute the second largest segment. [7]

The global demand for automobiles, consumer electronics, energy-efficient lighting, and catalysts is expected to rise rapidly over the next decade. Rare earth magnet demand is expected to increase, as is the demand for rechargeable batteries. New developments in medical technology are expected to increase the use of surgical lasers, magnetic resonance imaging, and positron emission tomography scintillation detectors.

Rare earth elements are heavily used in all of these industries, so the demand for them should remain high.