A black organic gem material that is also a rock very similar to coal. 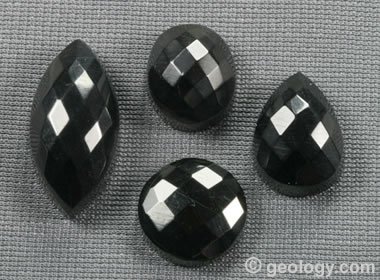 Faceted jet: Four stones of faceted jet from the Whitby area of England. These stones clearly show how jet can accept a highly reflective polish. The round stone at the bottom of this photo is about 12 millimeters in diameter.

Jet is a black organic rock that forms when pieces of woody material are buried in sediment and are coalified. Though very similar to coal, it is less friable. Jet can be cut, carved, and polished to a bright luster. People have used jet for thousands of years to produce gemstones, beads, and many other objects. Jet is one of just a few organic gemstones. It is the material that inspired the phrase "jet black," which means "as black as possible." 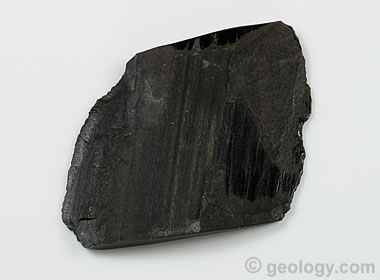 Jet with wood grain: A thin piece of jet from a mine near Whitby, England. The surface of this piece shows some of the structures of the plant from which it was formed. The specimen is about 3 centimeters across.

How Does Jet Form?

The material known as "jet" is very similar to coal, but the way that it forms is different. Most coal seams form when a swamp containing abundant woody material is buried; that woody material is then compacted, undergoes organic degradation, and is heated. The result is a coal seam.

Jet does not form in a seam. Instead, it forms when an individual piece of woody material such as a tree branch is washed into a body of water, becomes waterlogged, sinks to the bottom and is covered by organic-rich sediment. It is then compacted, degraded, and heated in isolation.

This produces a material that is similar to coal; however, this material is much more influenced by the geochemical environment of the surrounding organic-rich shale. Jet is thought to absorb oils released by the decay of oil-rich organic debris in the surrounding rock, such as algae and plankton. As the jet is transformed into a rock, it does not develop a system of fractures, known as "cleat," which develops in a coal seam. This gives the jet a more uniform texture and a toughness that contrasts with the friability of coal removed from a seam.

The woody origin of jet has been confirmed because, when examined under magnification, jet contains the preserved cellular structure of the original woody plants. Some specimens display obvious plant structures without magnification.

Jet found in the Whitby area of England was deposited in a saltwater swamp about 180 million years ago. It was then compressed during burial and geologically heated to temperatures and pressures that took it through the rank of lignite, and almost to the rank of sub-bituminous coal. This has given the hard jet of Whitby the better working qualities than any other jet that has been found in abundance. As a result, "Whitby Jet" is now famous throughout the world.

Jet has a few properties that make it useful and desirable. These have dictated its use across the centuries. The first of these properties is its ability to be easily carved or cut into shapes. Jet is soft and has a uniform texture, which allows it to be carved with precision.

Jet can be rubbed to a nice matte finish or polished to a very bright luster. Done well, these finishes enhance the aesthetic value of carved or cut pieces of jet.

Jet also has a low specific gravity. A strand of jet beads or a large cabochon thus weighs about 50% less than if they were made from agate, jasper, quartz, or other mineral material. This allows the beads to be worn with greater comfort and the brooch to be worn without placing as much stress or hanging awkwardly on the garment. 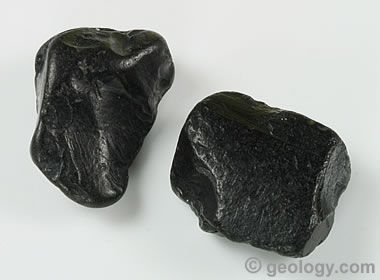 
History of Human Use

The most important source of jet has always been the eastern coast of England and Scotland, centered near what is now the community of Whitby. In this area people found small, black, rounded, light-weight stones along the shoreline. They discovered that these stones could easily be fashioned into beads and other objects and could be polished to a very bright luster. In ancient Egypt, small flat pieces of jet were polished to a bright luster and used as mirrors.

People have been making items from jet since the Stone Age. One of the oldest known jet objects is a necklace made from alternating jet and chalk beads found in a Neolithic burial in France. Necklaces of jet beads have been found in numerous bronze-age mound burials in England and Scotland. At two bronze-age sites in England, partially finished jet items, waste fragments, and the tools used to make them reveal an early jet industry [1].

During the Roman rule of Britain, much jet was collected along the beaches around Whitby and taken to York for manufacturing into jewelry and other items. These items were then marketed locally and sold to merchants in Europe. Items made with jet were marketed with stories claiming that the material had protective and healing properties. This inspired people to fashion jet into amulets and talismans that were worn for protection or good fortune.

The greatest popularity of jet began in about 1861 when Queen Victoria began wearing it in "mourning jewelry" after the death of her husband, Prince Albert. Perhaps inspired by the Queen, many people in England and other parts of the world began wearing jewelry made with jet. Jet was used to make beads, cabochons, cameos, intaglios, combs, hair pins, bangles, rosaries, cane handles, pens, seals, letter openers, candlesticks, silverware handles, and many other decorative and useful objects.

By this time, beachcombers in eastern Scotland and England had found most of the shoreline jet. Manufacturers then turned to mining the bituminous shales of the Upper Lias. These shales contained nodules and thin bands of jet. They were abundant enough that, in some areas, workers could tunnel into the shale and extract profitable quantities of jet. Jet mining began shortly before Queen Victoria called attention to jet and continued into the 1920s.

Deposits of jet were discovered in other countries beyond Britain, including Spain, Germany, China, Turkey, and Siberia. In the United States, jet has been found in Virginia, New Mexico, Utah, and Alaska. None of these locations produced jet that had the same working qualities and beauty as the jet found near Whitby. 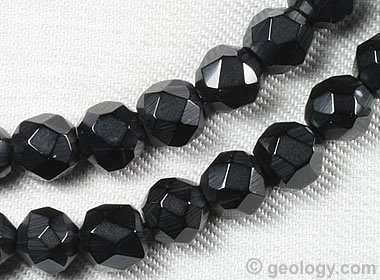 Jet beads: Faceted beads made of Whitby Jet. The beads range between 10 and 11 millimeters in diameter. Their faceted surfaces show striations from manufacturing.

Use of Jet and Jet Substitutes Today

As a fashionable item, jet declined quickly during the Great Depression when the demand for manufactured goods of all kinds collapsed. It never regained its Victorian popularity and is used infrequently today.

Jet is one gem material that has been heavily replaced by look-alikes and imitations. When jet was popular, materials such as black glass and gutta-percha (a natural latex made from the sap of the getah perca plant) competed with jet for sales. These materials were less expensive and easily formed into beads and other shapes.

Today, modern materials, including plastic, vulcanite, glass, and black cubic zirconia compete with jet for market share. Price, availability, and ease of mass production give these materials a competitive edge.

It is possible that the world does not have enough jet to supply all of these uses. Glass, plastic, and cubic zirconia substitutes for jet are regularly marketed as "jet black" in color. Even though jet as a material is rarely used today, its name persists in the marketplace - and some people still want the real thing.