A green gem material and a rare nickel carbonate mineral. 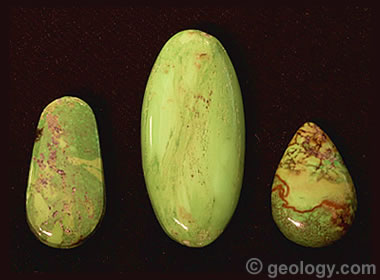 Gaspeite Cabochons: Three gaspeite cabochons all cut from material from Australia. The cab in the center measures about 1 5/16 inches (34 millimeters) high.

Gaspeite is a rare nickel carbonate mineral and a member of the calcite mineral group. It was first discovered on the Gaspe Peninsula of Quebec, Canada, from which it received its name. Gaspeite does not have a long history in the scientific literature, being first described in The American Mineralogist in 1966. [1] Because of its rarity and relatively short history, it is not a widely-known material.

However, over the past two decades, gaspeite has been emerging into popularity as a colorful inlay material used to add a splash of green color to Southwestern-style jewelry. It is typically set with turquoise, coral, shell, lapis lazuli and other gem materials in sterling silver mountings. These produce an attractive and affordable product. Gaspeite is also seen as beads, tumbled stones and cabochons.

The idealized composition of gaspeite is NiCO3. However, it often contains variable amounts of magnesium and iron, which can substitute for nickel in solid solution. Thus, the material called "gaspeite" is often a nickel-magnesium-iron carbonate with a composition of (Ni,Mg,Fe)CO3. [1]

A solid solution series exists between magnesite (MgCO3) and gaspeite (NiCO3). Intermediate materials from the series are sometimes seen as tumbled stones, cabochons and inlay materials. How should the members of this solid solution series be named? If the amount of MgCO3 exceeds the amount of NiCO3, then use of the name "magnesite" is proper. The name "gaspeite" is proper if NiCO3 exceeds MgCO3. 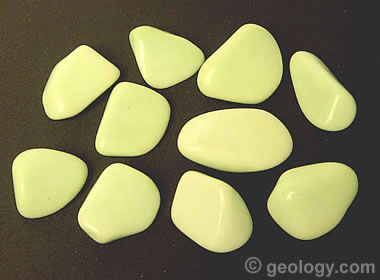 Lemon Magnesite: Tumbled stones of material in the magnesite-gaspeite solid solution sequence. They are probably closer to magnesite. Vendors often call stones like these "lemon magnesite" or "citron magnesite".

Gaspeite occurs as a secondary mineral where nearby rocks serve as an abundant source of nickel. It is often found where ultramafic igneous rocks have been weathered or where they have been altered by hydrothermal metamorphism. All significant occurrences have been found in Western Australia and Quebec, Canada. Minor occurrences are known from Japan and South Africa. 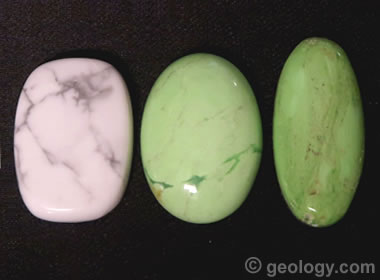 Magnesite and Gaspeite: Three cabochons in the magnesite-gaspeite sequence. The cab on the left is magnesite, the cab on the right is gaspeite, and the cab in the center has an intermediate composition.

The first clue to identifying gaspeite is its yellowish green to bright green color. It will also produce a weak effervescence with dilute (5%) hydrochloric acid. Producing effervescence often requires testing of the mineral’s powder. It is easy to produce a powder by scraping the specimen across a streak plate, applying the acid to the streak, and checking for effervescence with a hand lens.

The best low-budget testing is done with a refractometer. Gaspeite has a birefringence of 0.222 with a refractive index that ranges from 1.61 to 1.83. It also displays a strong birefringence blink, like most other carbonate minerals. This is the most diagnostic test that can be done for gaspeite without expensive equipment. 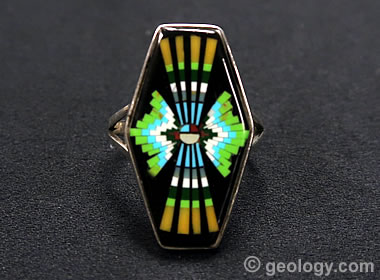 Gaspeite Inlay: Gaspeite is sometimes used as an inlay material in Southwestern-style jewelry. Here is is used in a design in combination with turquoise, magnesite, petrified wood, gray agate, black chalcedony and spiny oyster.

Starting in the late 1990s, gaspeite began appearing in lapidary and jewelry markets. It has been used to produce cabochons, beads and tumbled stones. Its most beautiful use is as an inlay material in sterling silver jewelry of the American Southwest. Bright green gaspeite adds a new and striking splash of green color to this jewelry. In the past decade its appearance in Southwestern jewelry has become more frequent.

Much gaspeite has also been processed as an ore in the production of nickel. The most important occurrences of gaspeite found to date are the one in Quebec, Canada, described above, and a few others in Western Australia. All of these have been associated with nickel-mining activities. Gaspeite contains significant amounts of nickel, and it was closely associated with other ores of nickel at these locations.

Gaspeite is seldom mentioned in the publications of mineralogy, gemology and lapidary. In the GemNews section of the Summer 1994 issue of Gems and Gemology, authors reported that green cabochons sold under the trade name of "Allura" at the 1994 Tucson Gem and Mineral Show tested to be gaspeite. [2] This was the first important report of the emergence of gaspeite for jewelry use.

GemNews in the Fall 1996 issue of Gems and Gemology reported on material sold as "lemon chrysoprase". It tested as magnesite but with significant nickel - which probably accounted for the green color and was likely gaspeite in solid solution with magnesite. [3]

GemNews in the Winter 2011 issue of Gems and Gemology reported that the color in specimens of chrysoprase from the Haneti-Itiso area of Tanzania was caused by the incorporation of trace amounts of gaspeite in the microstructure of the chalcedony. [4]