What is Soapstone? How Does it Form? How is it Used? 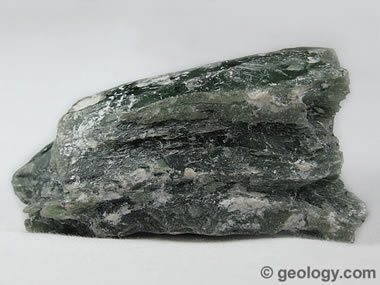 Soapstone: A metamorphic rock that consists primarily of talc with varying amounts of other minerals such as micas, chlorite, amphiboles, pyroxenes, and carbonates. It is a soft, dense, heat-resistant rock that has a high specific heat capacity. These properties make it useful for a wide variety of architectural, practical, and artistic uses.

People have quarried soapstone for thousands of years. Native Americans in eastern North America used the soft rock to make bowls, cooking slabs, smoking pipes, and ornaments as early as the Late Archaic Period (3000 to 5000 years ago). [1] Native Americans on the west coast traveled in canoes from the mainland to San Clemente Island (60 miles offshore!) to obtain soapstone for cooking bowls and effigy carving as early as 8000 years ago. [2]

The people of Scandinavia began using soapstone during the Stone Age, and it helped them enter the Bronze Age when they discovered that it could be easily carved into molds for casting metal objects such as knife blades and spearheads. They were among the first to discover the ability of soapstone to absorb heat and radiate it slowly. That discovery inspired them to make soapstone cooking pots, bowls, cooking slabs, and hearth liners.

Throughout the world, in locations where the soapstone is exposed at the surface, it was one of the first rocks to be quarried. Soapstone's special properties continue to make it the "material of choice" for a wide variety of uses. 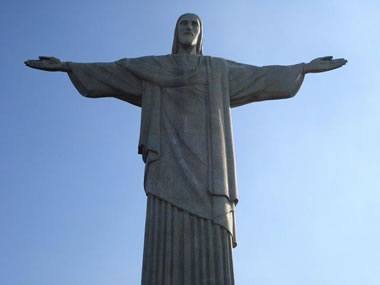 Soapstone statue: The famous "Christ the Redeemer" statue that overlooks the city of Rio de Janeiro, Brazil is made of reinforced concrete and faced with soapstone. The statue is 120 feet tall and was built on Corcovado Mountain. CIA image. 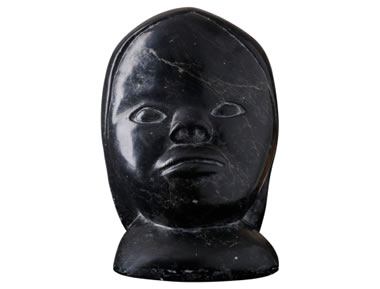 Soapstone is a metamorphic rock that is composed primarily of talc, with varying amounts of chlorite, pyroxenes, micas, amphiboles, carbonates, and other minerals. [4] Because it is composed primarily of talc it is usually very soft. Soapstone is typically gray, bluish, green, or brown in color, often variegated. Its name is derived from its "soapy" feel and softness.

The name "soapstone" is often used in other ways. Miners and drillers use the name for any soft rock that is soapy or slippery to the touch. In the craft marketplace, sculptures and ornamental objects made from soft rocks such as alabaster or serpentine are often said to be made from "soapstone." Be careful when purchasing if the type of rock used in making the object is important to you. 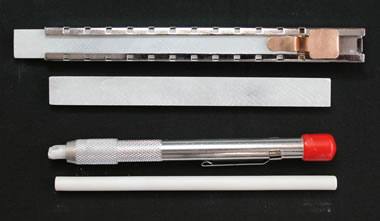 Soapstone pencils: Talc is very soft and has a white streak. Since soapstone is made primarily of talc, it will deposit a white powder when it is rubbed against almost any object. This white mark is similar to talcum powder and is easily brushed off without leaving a permanent mark. Soapstone pencils are used by tailors to mark fabric. Soapstone markers are also used by welders. The heat-resistant powder does not burn away and continues to be visible when the workpiece is heated during the welding process.

How Does Soapstone Form?

Soapstone most often forms at convergent plate boundaries where broad areas of Earth’s crust are subjected to heat and directed pressure. Peridotites, dunites, and serpentinites in this environment can be metamorphosed into soapstone. On a smaller scale, soapstone can form where siliceous dolostones are altered by hot, chemically active fluids in a process known as metasomatism.

Soapstone is a rock, and its mineral composition can vary. Its composition depends upon the parent rock material and the temperature/pressure conditions of its metamorphic environment. As a result, the physical properties of the soapstone can vary from quarry to quarry and even within a single rock unit. 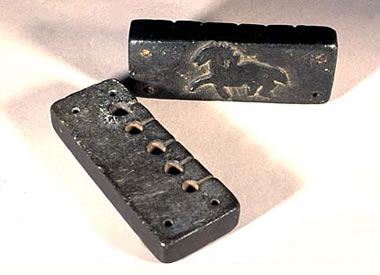 Soapstone bullet mold from the Revolutionary War era. The two halves of this mold would be placed together and secured with wooden sticks through the four holes. Then molten lead would be poured into the five bullet molds. The mold would be opened after cooling, the lead sprue would be cut from the bullet, and the bullet surface would be filed smooth. Soapstone was used to make bullet molds because it was easily carved, heat resistant, and durable enough to be used hundreds of times. Image from the Guilford Courthouse National Military Park, National Park Service.

How is Soapstone Used?

The special properties of soapstone make it suitable, or the material of choice, for a wide variety of uses. A number of examples of soapstone use are explained below and in the photograph captions on this page. 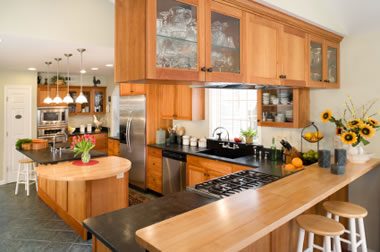 Soapstone countertops: The dark countertops and sink in this photo are made from soapstone. Soapstone is heat resistant, stain resistant, nonporous, and resistant to attack from acids and bases. It is often used as a natural stone countertop in kitchens and laboratories. Image copyright iStockphoto / Virginia Hamrick.

Soapstone is often used as an alternative natural stone countertop instead of granite or marble. In laboratories it is unaffected by acids and alkalis. In kitchens it is not stained or altered by tomatoes, wine, vinegar, grape juice, and other common food items. Soapstone is unaffected by heat. Hot pots can be placed directly on it without fear of melting, burning, or other damage.

Soapstone is a soft rock, and it is easily scratched in countertop use. However, a gentle sanding and treatment with mineral oil will easily remove shallow scratches. Soapstone is not suitable for use as a workbench top where it will receive rough treatment and where sharp or abrasive objects will be placed upon it. 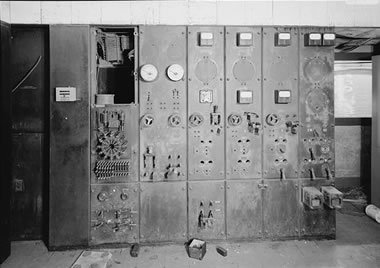 Soapstone electrical panels: Remains of the original 1907 soapstone control panel of the Cos Cob Power Plant near Greenwich, Connecticut. Thick slabs of soapstone were often used to hold high-voltage equipment and wiring because soapstone is heat resistant and does not conduct electricity. Image by Jet Lowe, Historic American Buildings Survey, National Park Service.

Soapstone tiles and panels are an excellent choice where heat and moisture are present. Soapstone is dense, without pores, does not stain, and repels water. Those properties make soapstone tiles and wall panels a good choice for showers, tub surrounds, and backsplashes.

Soapstone is heat resistant and does not burn. That makes it an excellent wall covering behind wood-burning stoves and ovens. Fireplaces are also lined with soapstone to create a hearth that quickly absorbs heat and radiates it long after the fire is out. This property of soapstone was recognized in Europe over 1000 years ago, and many early hearths there were lined with soapstone. 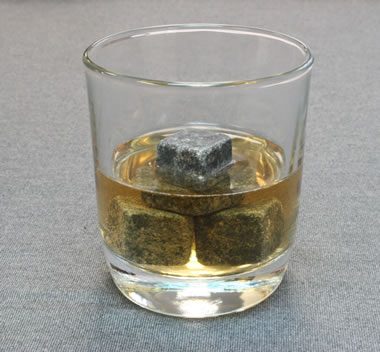 Whiskystones are small soapstone cubes that are refrigerated and then used to chill a glass of whisky. They do not melt and dilute the drink. Since soapstone has a very high specific heat capacity and changes temperature very slowly, a few stones can keep a drink cold for 30 minutes or more.

Soapstone does not burn or melt at wood-burning temperatures, and it has the ability to absorb heat, hold heat, and radiate heat. These properties make it an excellent material for making wood-burning stoves. The stove becomes hot and radiates that heat into the room. It also holds heat, keeping the coals hot and often allowing the owner to add more wood without the need for kindling.

Soapstone pipe: Native Americans have used soapstone to make smoking pipes and pipe bowls. They used soapstone because it is easy to carve and drill. Its high specific heat capacity enabled the outside of the bowl to have a lower temperature than the burning tobacco inside. Image copyright iStockphoto / Gill André. 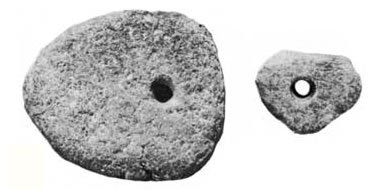 Boiling stones: Native Americans made "boiling stones" from soapstone. Cooking was done in a small pit lined with a thick animal skin. A boiling stone would be placed in a nearby fire until it was very hot. A stick was then poked through the hole in the stone, and the stone was lifted from the fire, carried to the cooking pit, and dropped into the stew. National Park Service photo, Ocmulgee National Monument.

Soapstone bowls: Native Americans made cooking bowls from soapstone. These bowls would be placed in a fire and used to cook stews and meat. The mouth of the unbroken bowl is about four inches across. Soapstone worked well for this type of cooking because it is heat resistant and can withstand the heat of a wood fire. National Park Service photo, Grand Teton National Park.

Soapstone cooking pots absorb heat readily from the stove and radiate it into the soup or stew. Because their walls are thick, they take a little longer to heat than a thin metal pot. However, they heat their contents evenly and retain their heat when removed from the stove - the contents of the pot keep cooking until the pot itself begins to cool. Soapstone pots are highly prized by people who learn how to use them.

Stone Age people made the first cooking pots from soapstone without the aid of metal tools. The soft rock could be worked with sharp stones, antlers, or bone. Skilled craftsmen carved the pots directly from the outcrop. Small soapstone pots were highly prized and traded widely. Large soapstone pots were very heavy and difficult to move. Archaeologists believe that large soapstone pots were used at sites where the residents had intentions of living there for a long time. 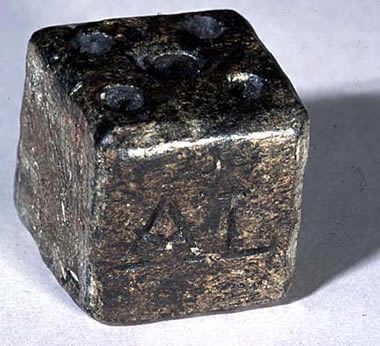 Soapstone ink well: Soapstone inkwell from the 1700s with the initials "AL" carved on one side. Image from Guilford Courthouse National Military Park, National Park Service.