A metamorphic rock that has been altered by hot, chemically-active fluids. 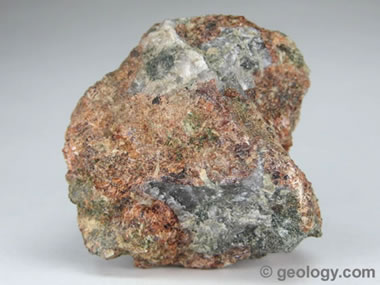 Skarn: A specimen of skarn composed mainly of garnet, pyroxene, carbonate, and quartz. This specimen is approximately three inches across.

Skarn is a metamorphic rock that has been chemically and mineralogically altered by metasomatism. Metasomatism is the alteration of rocks by hot, chemically-active fluids that flow or diffuse through the rocks and cause recrystallization and compositional change.

Skarn commonly forms around the edges of a magma body that intrudes a nearby rock mass. Rocks formed or altered by the interaction of magma, country rock, reactive fluids, and heat are known as skarn. Other environments of metasomatic activity are also known to produce skarn. 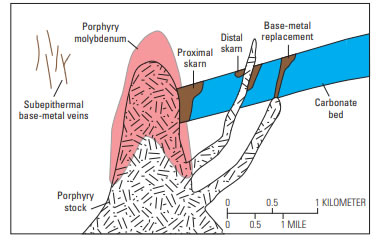 Skarn in Carbonates: This diagram illustrates a cross section through a porphyry molybdenum deposit and its associated skarns. The skarns have formed within a carbonate bed near where it had been penetrated by igneous intrusions. Molybdenite is the most important ore mineral of molybdenum. Illustration by the United States Geological Survey, modified after R.H. Sillitoe. [1] [2]

An Example of Skarn Formation

Then, as the magma cools, it releases hot, acidic, silicate-rich fluids. Some magmas contain up to several percent dissolved water on the basis of weight, but because of the specific gravity difference between water and magma, the volume percent of dissolved water is at least twice the weight percent.

When this water is expelled from the magma, it is a solvent that has the ability to carry heat and chemically-active solutes into the country rock.

Water leaving the magma moves through the surrounding country rock by flowing or diffusing through pore spaces, fractures, and even the mineral grains that make up the rock. As it invades carbonate rock, the hot, acidic, metal-laden water dissolves, replaces, recrystallizes, and alters minerals in the carbonate rock.

These acidic waters are superheated and supersaturated with dissolved metal ions, especially calcium and silicon. As the acidic water moves through the carbonate rocks, its temperature falls and its acidity is neutralized. As this occurs, large amounts of calc-silicate minerals begin to precipitate in the carbonate country rock and change its composition.

Many different types of rock can be transformed into skarn by metasomatism. The original rock that is altered is known as the "protolith". Although carbonate rock is the most common protolith, many skarns have formed in granite, basalt, conglomerate, tuff, shale, and other types of rock.

Skarn as a Complex Rock Mass

Exoskarns form when the original chemistry of a rock mass is altered - as hot fluids of incompatible chemistry flow or diffuse through the rock. The intensity of alteration and the types of minerals formed can change with distance from the magma body. These mineral variations across the rock mass develop in response to gradients in temperature and chemistry over geography and time.

In the example described above, skarn formed in a carbonate rock unit adjacent to a magma intrusion. There are numerous other geological situations where skarn can be formed. These include:

Skarn can form with various water inputs. These include include: 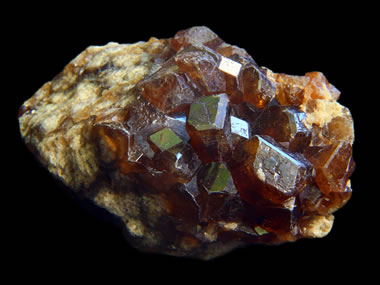 Skarns often contain a diverse assemblage of metamorphic minerals. The mineral assemblage in a skarn is determined by the lithology of the invaded rock, the chemistry of the invading liquid, and the temperature of the rock environment.

Metamorphic minerals that characterize the skarn environment include a wide range of calc-silicates, many types of garnet, and a range of pyroxenes and amphiboles. Occasionally, valuable metallic mineral ores occur in skarn. Some of the world’s best copper, gold, lead, molybdenum, tin, tungsten, and zinc deposits have been in skarn. 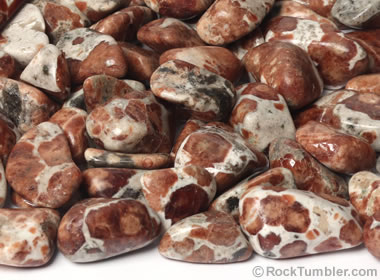 Garnet Crystals in Skarn: Tumbled stones produced from pieces of skarn that have been processed in a rock tumbler. Stones average about one inch across. Photo by RockTumbler.com.

Demantoid garnet and topazolite have been mined from the Antetezambato skarns near Ambanja, northern Madagascar. [4]

Sapphires are mined from skarn in the Andranondambo Region of Madagascar. [5]

Yellow scapolite has been mined from a skarn deposit near the town of Ihosy in southern Madagascar. [6]

Rubies have been found in the skarns of northern Mozambique. [7]

Sometimes pieces of skarn are processed in a rock tumbler to produce interesting gems (see the accompanying photo).