A rare pink to purple gemstone and silicate mineral. 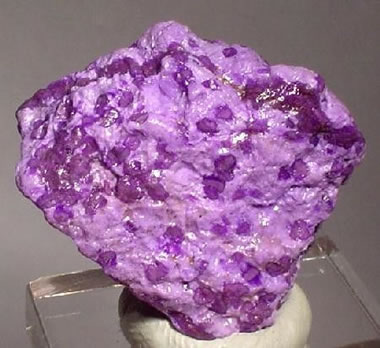 Sugilite is a rare mineral and a gemstone best known for its vibrant pink to purple colors. High-quality specimens are sought after by mineral collectors and lapidarists (people who cut and polish gems).

Sugilite is a sodium potassium lithium silicate mineral. Small amounts of manganese produce the pink to purple color displayed by some specimens of sugilite. Its chemical composition is as follows: 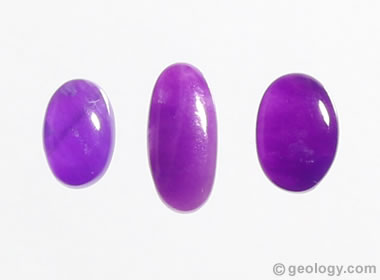 Sugilite Cabochons: Three small cabochons of translucent sugilite with a wonderful purple color. They are a grade of sugilite that is often described as "gel sugilite". The cab in the center measures approximately 5 x 10 millimeters. 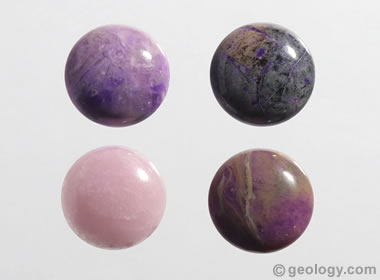 Impure Sugilite: Sugilite often occurs in rocks composed of many minerals. These cabochons are a combination of sugilite, chalcedony, and other minerals. Impure sugilite can make attractive cabochons that should sell for prices much lower than solid sugilite - unless they have a color and appearance that merits the price, which these cabochons do not have. Each cab measures 20 millimeters across.

Sugilite was first discovered in 1944. It did not enter the gem and jewelry market until 1979, after commercial quantities of gemstone-quality sugilite were found at the Wessels Mine in South Africa. [1]

Very few jewelry consumers are familiar with sugilite. Why? Because it is a rare mineral, only available in small quantities, has a short commercial history, and has never been heavily promoted.

Cabochons, beads, and small sculptures are the most common items made from sugilite. With a Mohs hardness of 5.5 to 6.5, sugilite is best used in pendants, earrings, brooches and other items that are not exposed to abrasion or impact. When used in rings and bracelets, sugilite should be in a mounting that protects it from damage, and the owner should be aware of the fact that it is a fragile gemstone.

The best pieces of solid sugilite are usually found in one-of-a-kind jewelry items. However, increasing amounts of sugilite are starting to appear in the sterling silver and turquoise jewelry that is popular in the southwestern United States. It is often used in inlay designs and as small secondary stones.

Some of the most impressive items made using sugilite are small boxes, desk sets, trays, and jewelry decorated with intarsia designs. The purple color of sugilite creates wonderful color combinations with malachite, turquoise, lapis lazuli, and opal. An article in Gems & Gemology shows nice examples of these projects. [2]

Pieces of sugilite that are too small to cut or below cutting grade are often crushed, mixed with resin, and cast into blocks. The blocks are then cut into slabs and used to cut beads and cabochons. "Block turquoise" is made by a similar process.

Much of the material that is called "sugilite" and used to make jewelry is a natural mixture of sugilite and other minerals, sometimes with sugilite being a minor ingredient. In rocks near where sugilite is found, purple chalcedony with suspended particles of sugilite is sometimes found. This material can be beautiful and is similar to gem silica. 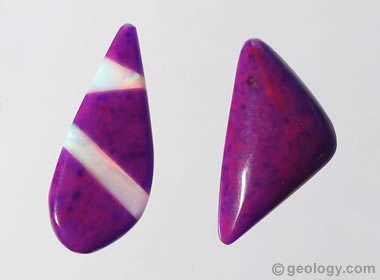 Imitation Sugilite: The purple material in these cabochons is made of powdered sugilite that has been pressed into a mold and bound together by resin. The cabochon on the left is an assembled stone made by artistically combining imitation sugilite and imitation opal. The cab on the left measures 20 x 50 millimeters, and the cab on the right measures 23 x 45 millimeters.

Imitation sugilite and composite materials made to imitate sugilite are abundant in the marketplace. These items are often sold without disclosure. Much imitation sugilite is also labeled as "synthetic". It is likely that sellers are unaware of what they are selling.

The Gemological Institute of America reports that dyed marble [3] and dyed quartzite [4] have been used as sugilite imitations. GIA also reported on purple beads that were a convincing imitation of sugilite. Advanced testing of the beads revealed that they were made from dyed serpentine [5]. 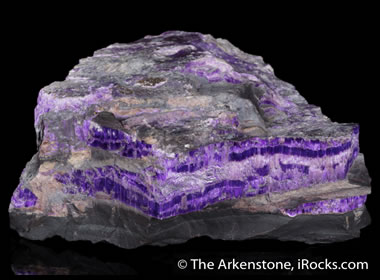 Fibrous Sugilite: A specimen of gray-black manganese-bearing shale from the Kalahari Manganese Field that contains bands of fibrous sugilite. The fibrous portions of the bands produce chatoyant reflections. This specimen measures 11.2 x 10.9 x 4.7 centimeters and is from the N'Chwaning III Mine, North Cape Province, South Africa. Specimen and photo by Arkenstone / www.iRocks.com.

Sugilite occurs in only a few locations worldwide. Production of gem-quality sugilite only occurs in noteworthy amounts from the stratiform manganese deposits in South Africa. Sugilite is also found in small amounts as a primary mineral in igneous rocks and as a secondary mineral in marble.

Manganese deposits similar to those of South Africa exist in other countries (India, Brazil, Ghana, and Russia), but none of these deposits are known to be commercial producers of sugilite.

Sugilite was first discovered in 1944 in a small stock on Iwagi Islet, Southwest Japan by Japanese geologists Ken-ichi Sugi and M. Kutsuna. They did not identify the mineral, but described it as an eudialyte-like mineral based upon its optical properties.

At the Iwagi Islet locality, sugilite occurred in an aegirine syenite, and accounted for 3% to 8% of the rock's volume.

In 1976, Nobuhide Murakami and others published the first detailed description of the mineral's chemistry and structure. They posthumously named the mineral "sugilite" to honor to Ken-ichi Sugi (1901-1948). [6]

Today most sugilite entering the market as gem rough or mineral specimens is from a few mines in the Kalahari Manganese Field, North Cape Province, South Africa. Gem material from the Wessels Mine has been marketed under various names that include Lavulite and Royal Azel. [1] 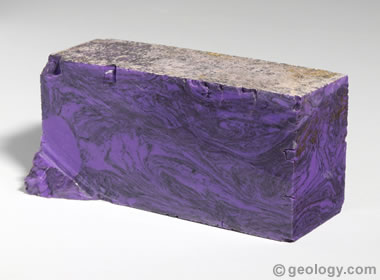 Imitation Sugilite: A block of imitation sugilite made from a resin composite. This specimen measures approximately 9.8 x 4.8 x 3.5 centimeters.

A person interested in purchasing sugilite jewelry, loose stones, or cutting rough should be very familiar with the material. The conditions of the gem that they might encounter are listed below:

1) Natural sugilite: This is a naturally occurring material that consists entirely of natural sugilite. Attractive pieces of this material should sell for the highest prices, with an attractive, uniform color being an important element of value. This material is the choice of a person who wants to purchase a wonderful product of nature.

3) A man-made composite of crushed sugilite and resin (block sugilite): This is a man-made material that might be especially attractive, with color enhancement done by people being likely. Attractive pieces of this material should sell for significantly lower prices than natural sugilite of similar color and appearance. Buy this if you like sugilite, if you like the appearance of the piece, and if you are satisfied with an item that is made from crushed sugilite bound together with resin, and probably color-enhanced by people. This is what you will likely receive if you are buying at the lower end of the sugilite price range. Some buyers absolutely do not want this material. They want naturally-formed sugilite. But, there is nothing wrong with buying this product if you like it and your seller discloses what you are buying. Unfortunately, some sellers label this material as "sugilite" and do not know or choose to disclose its true nature.

4) A natural material that is not sugilite, but has been dyed and treated to be a sugilite look-alike. The top of this article cites reports from the Gemological Institute of America about people making sugilite look-alikes by dying marble, serpentine and quartzite. There is nothing wrong with buying these as long as you know that you are not buying sugilite, and the seller is not telling you that the item is natural sugilite.

5) A man-made material that contains no sugilite: This is a man-made material produced with the goal of being a sugilite look-alike. It could be made from ceramic, plastic, glass, or another material. It is an imitation sugilite that should sell for a significantly lower price than similar-looking items from the categories above. There is nothing natural in this material, but if you like it there is nothing wrong with buying it. The problem occurs when the seller fails to disclose that it is a man-made imitation and is simply promoting it as "sugilite".

Buy with caution. On the basis of "sight" alone, it can be difficult to impossible to tell the difference between sugilite, rocks containing abundant sugilite, block sugilite, and some of the dyed and imitation materials. Microscopy, spectroscopy, specific gravity determination, and refractive index testing can help separate sugilite from many of its look-alikes. If you are spending serious money on a sugilite item, you should have its identity confirmed by gemological laboratory.