Also known as idocrase, especially when used as a gem 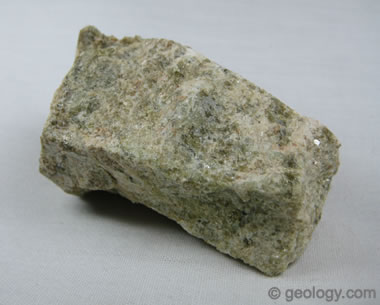 Vesuvianite: A specimen of massive vesuvianite in a partial replacement of marble. This specimen measures about four inches across and was collected in Crestmore, California.

Vesuvianite, also known as idocrase, is a calcium aluminum silicate mineral with a chemical composition as follows: (Ca,Na)19(Al,Mg,Fe)13(SiO4)10(Si2O7)4(OH,F,O)10 [1]. It usually forms during contact metamorphism or hydrothermal metamorphism of carbonate rocks and is found in limestone, dolomite, marble, granulite, or skarn. Vesuvianite has no significant industrial use, but specimens with exceptional color and quality are desired by mineral collectors, cut into gems, or carved into small sculptures.

Some people do not realize that the mineral or gemstone that they are speaking about is known to others by a different name. Both names originated in the late 1700s and have persisted together in widespread use.

In 1795, Abraham Gottlob Werner named the mineral "vesuvianite" because crystals of the mineral were found in ejecta near Mount Vesuvius, the famous volcano near Naples, Italy. [2]

In 1796, René Just Haüy named the mineral "idocrase" (derived from two Greek words, eidos and krausis that mean "mixed form") because crystals of the mineral are often bound by multiple forms. [3] [4] 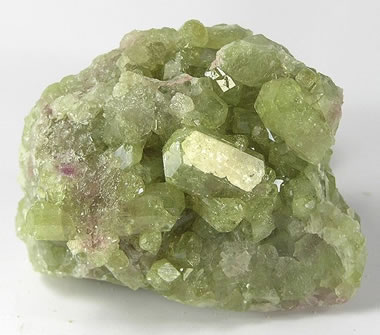 Vesuvianite Crystals: A tight cluster of tetragonal crystals of vesuvianite from the Jeffrey mine in Quebec, Canada. A little more crystal growth and this would have been a chunk of massive vesuvianite. Specimen measures 6.3 x 4.3 x 3.9 centimeters. Specimen and photo by Arkenstone / www.iRocks.com.

Vesuvianite is a mineral often found in rocks where igneous intrusions have penetrated limestone, dolomite, or marble. In this environment of contact metamorphism, recrystallized rocks near the margins of the intrusions often have a texture of interlocking grains without a preferred orientation.

The resulting rocks are often marble, dolomitic marble, granulite, or skarn in which vesuvianite occurs in massive form or as partial replacements of the country rock. Associated minerals often include garnet, wollastonite, or diopside. Well-formed crystals are rare, found only in vugs, cavities, and fractures.

Gem-quality vesuvianite has been found in Switzerland, Italy, and Quebec, Canada. Much of the recent production is from Kenya and Tanzania. Cabochon-grade vesuvianite is found in California.

Vesuvianite is usually translucent and green, yellowish green, or brownish green in color. Rare specimens can be colorless, white, blue, pink, purple, violet, red, or black. Some crystals exhibit color zoning. Vesuvianite always has a white streak and a Mohs hardness of approximately 6.5.

The cleavage of vesuvianite is poorly defined. Crystals are brittle and break with a conchoidal fracture. The fracture surfaces usually exhibit a vitreous luster. Massive occurrences often break with a granular fracture.

Diagnostic properties of vesuvianite are its specific gravity (3.3 to 3.5); its association with carbonate rocks; and its green, glassy, prismatic crystals. 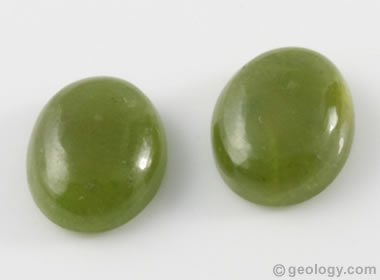 Vesuvianite Cabochons: Two cabochons of vesuvianite with an olive green color. These cabs were cut from material produced at the Happy Camp mine in Siskiyou County, California, and they measure approximately 10 x 8 millimeters.

If you are reading a book or a website about gemology, or browsing a shop that sells rare gems, you will likely find the name "idocrase" used for gemstones cut from this mineral.

When clean and attractive in color, translucent idocrase is cut into cabochons and small sculptures. Idocrase has a vitreous to greasy polished luster and often has a color and appearance similar to jade and serpentine. Rare specimens of transparent idocrase can be cut into faceted gems that often have a color and appearance that is very similar to peridot. Without gemological testing, idocrase can easily be confused with these similar materials.

Idocrase is a brittle material with a Mohs hardness of approximately 6.5. It is suitable for use in jewelry that will not be exposed to abrasion and impact. Earrings, pendants, and pins are excellent uses. When used in rings and bracelets, idocrase should be mounted in settings that will protect the stone, and the piece should not be worn during activities that may risk damage to the gem.

The name "Californite" is used for a green massive variety of vesuvianite found in Fresno, Siskiyou, and Tulare Counties, California. It polishes to a greasy luster and has an appearance that imitates jade. Californite is cut into cabochons and used as an ornamental stone. It is sometimes called "California jade" or "American jade", which are misnomers that should be avoided.

"Cyprine" is a name used for blue idocrase that might be colored by trace amounts of copper.

"Fluorvesuvianite" is a white variety of vesuvianite in which F exceeds OH.