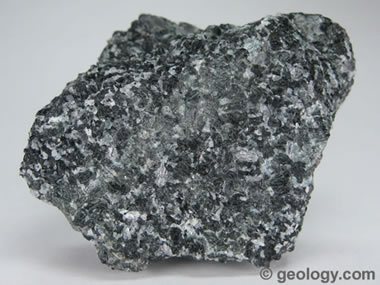 Amphibolite: Amphibolite is a coarse-grained metamorphic rock that has amphibole minerals such as the hornblende group as its primary ingredient. The specimen shown is about two inches (five centimeters) across.

Amphibolite is a coarse-grained metamorphic rock that is composed mainly of green, brown, or black amphibole minerals and plagioclase feldspar. The amphiboles are usually members of the hornblende group. It can also contain minor amounts of other metamorphic minerals such as biotite, epidote, garnet, wollastonite, andalusite, staurolite, kyanite, and sillimanite. Quartz, magnetite, and calcite can also be present in small amounts.

How Does Amphibolite Form? 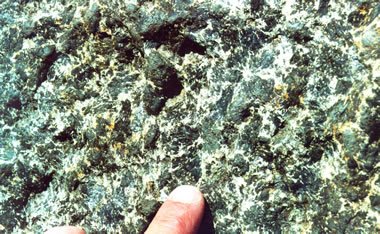 Higher quality stone is quarried, cut, and polished for architectural use. It is used as facing stone on the exterior of buildings, and used as floor tile and panels indoors. Some of the most attractive pieces are cut for use as countertops. In these architectural uses, amphibolite is one of the many types of stone sold as "black granite."

Some amphibolite deposits, such as the one at Gore Mountain in the Adirondacks of New York, contain significant amounts of garnet. If enough garnet is present and of proper quality, the amphibolite can be mined and the garnet recovered for use as an abrasive.