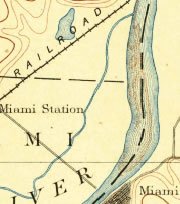 A tributary that parallels the main channel of a stream for a considerable distance. Joining of these streams is normally blocked by a natural levee along the larger stream. Shown in the image is Wakenda Creek paralleling the Missouri River before joining it near Miami Station, Missouri. This image is a portion of the USGS Marshall 30x30 minute quadrangle map of 1901.

Oxidized kimberlite (a variety of the rock type known as peridotite). A yellow soil that is characteristic of the area above a kimberlite pipe. Yellow ground is used by geologists looking for diamonds. Yellow soils are unusual. When you encounter one, you might be over a kimberlite pipe.

A variety of limonite that is ground into a yellow-brown powder for use as a pigment. People have used it for thousands of years as a powder, as an ingredient in paint, and as an additive to materials where the color is desired.

The quantity of copper, coal, gold, or other resource that can be produced from a deposit. 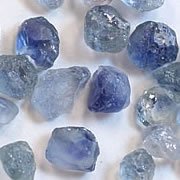 A variety of blue sapphire found in the Yogo Gulch area of Judith Basin County, Montana. People panning for gold in the mid-1800s noticed the "blue pebbles" and disregarded them because they were not recognized as sapphires, and there was no market for gem rough in Montana at that time. Their value was realized after a local rancher sent a small box of them to an assay office, who forwarded them to Tiffany's in New York, who sent the rancher a surprising check. Some early mining efforts in the area were profitable, and this triggered the discovery and sporadic production of sapphires in other parts of Montana. Today, most sapphires found in Montana are through the efforts of hobby miners working placer deposits. 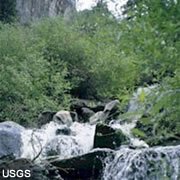 The earliest stage in the development of a landscape. During this stage, streams are actively downcutting and flowing straight for long distances with frequent waterfalls and rapids. The valleys are typically steep sided and V-shaped.

A variety of boulder opal found in the Yowah area of Queensland, Australia. Photo by J.J. Harrison and used here under a Creative Commons License.