The colorless variety of the mineral beryl. 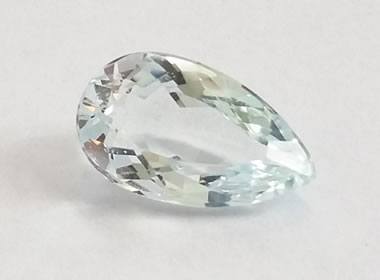 Faceted Goshenite: This specimen displays the excellent clarity and transparency that are frequently seen in goshenite. The gem is from Brazil and weighs 1.88 carats. Image by DonGuennie, used here under a Creative Commons license.

Goshenite, also known as white beryl, is the colorless to near-colorless variety of beryl. It is named after Goshen, Massachusetts, a community near one of the first deposits found in the United States.

Goshenite is often found as colorless to near-colorless, hexagonal crystals with exceptional clarity. It is also found as water-worn pebbles in alluvial deposits.

The Curse of Being Colorless

Unlike emerald and aquamarine, goshenite has not become popular in the jewelry industry. There are two likely reasons for this: 1) goshenite's lack of color does not attract people like the green of emerald and the blue of aquamarine; and, 2) goshenite does not have a level of brilliance, luster, or fire that enables it to compete as a colorless gem against alternatives that include diamond, colorless sapphire, and colorless topaz. As a result, goshenite is seldom seen in jewelry, and few jewelry shoppers have heard of it.

Exceptional crystals of goshenite are desired by mineral collectors. Nice faceted gems are desired by gem collectors. In both situations goshenite completes a beryl collection that includes aquamarine, emerald, green beryl, heliodor, maxixe, morganite, and red beryl. Many of the people who buy goshenite are building a mineral or gem collection that includes at least one specimen of each color variety of beryl. 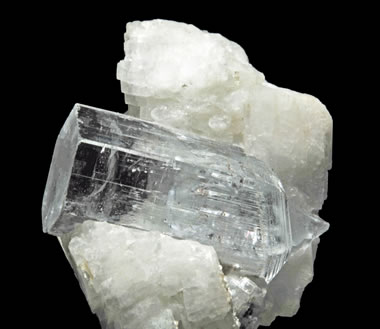 Most gem-quality goshenite crystals form in cavities below Earth's surface, on the fringes of a granitic magma body in its late stages of crystallization. The cavities provide open space for the uninterrupted growth of crystals. The late-stage timing is when beryllium-rich fluids are exiting the magma body. An abundant supply of beryllium is needed to form goshenite, a variety of beryl, a beryllium-rich mineral.

If rocks containing goshenite are exposed by erosion and weathering, the exceptional hardness of goshenite (7.5 to 8 on the Mohs hardness scale), along with its resistance to weathering, will enable it to persist in overlying soils and stream sediments. Much gem-quality goshenite is found as waterworn pebbles in stream sediments. Its presence there suggests that a primary deposit is located upstream.

Important sources of goshenite include the state of Minas Gerais, Brazil; the Ural Mountains of Russia; areas near Dassu, Pakistan; and, areas near Ampangabe, Madagascar.

Small mines that produce goshenite (along with other minerals) and goshenite occurrences are scattered across the world. The most comprehensive list and map of these can be found at mindat.org. [1]

Goshenite has four properties that made it attractive to some of Europe's early lens makers: 1) it is colorless, 2) it has exceptional clarity, 3) it is found in large crystals, and, 4) it has exceptional hardness. With a Mohs hardness of 7.5 to 8, goshenite was the material used in the earliest scratch-resistant lenses.

In the Middle Ages, goshenite crystals were cut and polished into lenses for hand magnifiers, telescopes, and some of the earliest eyeglasses. Its hardness was superior to the much more abundant quartz crystals. It was harder than any commonly encountered object that might scratch it. The German name "brille", used for spectacles, may have been derived from beryll, the German name for beryl. [2]