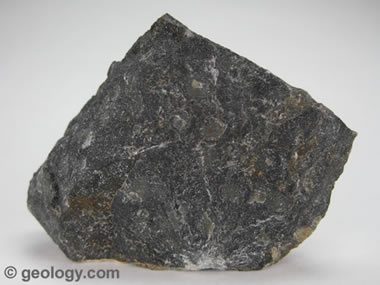 Hornfels: Hornfels is a fine-grained metamorphic rock without obvious foliation. It forms during contact metamorphism at shallow depth. The specimen shown is about two inches (five centimeters) across.

Hornfels is a fine-grained metamorphic rock that was subjected to the heat of contact metamorphism at a shallow depth. It was "baked" by heat conducted from a nearby magma chamber, sill, dike, or lava flow. Common temperatures for the formation of hornfels range from about 1300 to 1450 degrees Fahrenheit (700 to 800 degrees Celsius).

Because directed pressure does not play a significant role in the formation of hornfels, it is often made up of mineral grains that are equidimensional in shape and without a preferred orientation. The grain shape and orientation might also be inherited from its parent rock.

The name "hornfels" is assigned to a rock after considering its grain size, texture, and geologic history. As a result, hornfels does not have a specific chemical or mineralogical composition. It inherits its composition from the rocks that are metamorphosed plus the fluids involved in the metamorphic process. Interpreting composition, grain size, texture, and geologic history can make hornfels a very difficult rock to identify. 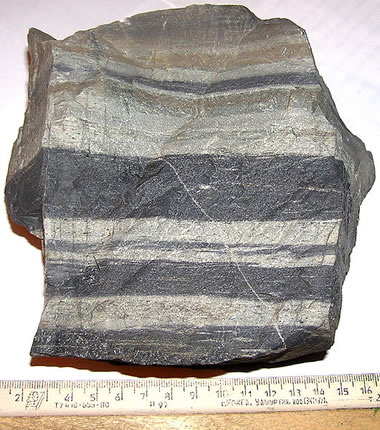 Banded Hornfels: Hornfels is often banded, especially when it forms from the metamorphism of sedimentary rocks. This specimen of hornfels is thought to have formed with sandstones and siltstones as the protoliths. The rock is about 6 inches (16 centimeters) across. Collected from the Borok Quarry near Novosibirsk, Russia. Public domain image by Fed.

Hornfels is not a rock that is "deposited". Instead it is a rock type that forms when an existing rock is metamorphosed. The original rock that was metamorphosed is usually referred to as the "parent rock" or "protolith". 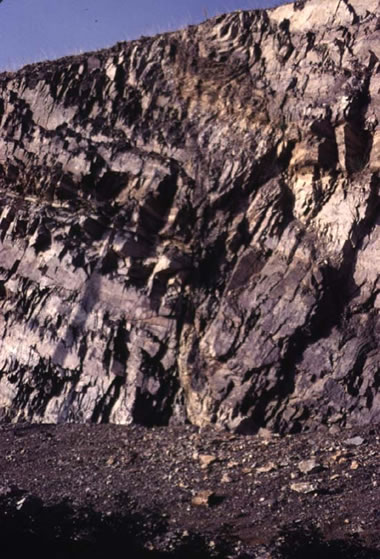 Hornfels Outcrop: An outcrop of hornfels along the Dulles Greenway in Loudoun County, Virginia. These rocks were originally thin-bedded siltstones and sandstones. Then hot diabase intruded as sills above and below these rocks, metamorphosing them into hornfels. A normal fault, dipping to the lower right, offsets bedding and disrupts the fracture pattern. Photo by the United States Geological Survey.

Hornfels often retains the stratification, large-scale geometry, and also some textural characteristics of the protolith. The changes of contact metamorphism that convert rocks to hornfels can include recrystallization, cementation, silicification, partial melting, and more.

The result is often a dense, hard, fine-grained rock that is generally homogenous and exhibits a semi-conchoidal fracture. Hornfels can be almost any color, but black, gray, brown, reddish and greenish rocks are common.

On the basis of mineral composition, most occurrences of hornfels can be separated into one of three general groups: