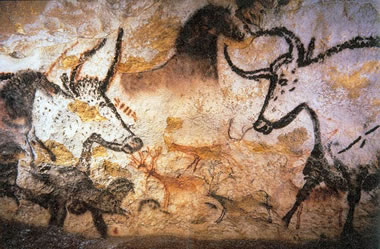 Pictograph from the famous Lascaux cave complex in southwestern France. Some scholars believe that the dots, arrows, and lines which accompany the paintings could be one of the earliest forms of "written" communication. This photograph by Prof saxx is displayed here under a Creative Commons License.

100+ Gems - Photos of over 100 beautiful gems ranging from the popular to the obscure.
Herkimer Diamonds

Fluorescent Minerals and rocks glow with spectacular colors under ultraviolet light.
Where Is Ukraine?

Ukraine is an independent state in eastern Europe that shares a border with Russia to its east.
Grape Agate

Grape Agate is a popular mineral specimen with the color and the shape of a bunch of grapes.
Coal Close Up

Coal Through a Microscope - Coal is more than a black rock. It is THE most interesting rock.
DeLorme Atlas

Topo Maps - The DeLorme Atlas is an entire state of topo maps in one convenient book.
Rock and Mineral Kits

Rock & Mineral Kits The best way to learn about rocks and minerals is with specimens!
Geology News

The Doorway to Hell is a flaming sinkhole seeping natural gas that has been burning for decades.
Emerald

Emerald is the most popular green gemstone in the United States and most of the world.
Olivine

Olivine - Abundant in Earth*s mantle. A constituent of meteorites. The gem peridot.
Don*t Go To Jail

Know the Rules before removing rocks, fossils or minerals from public or private property.
Rock Salt

Rock Salt is a sedimentary rock composed of the mineral halite. It has many uses!
Lapis Lazuli

Lapis Lazuli - a metamorphic rock and the most popular blue opaque gemstone in history.
Andalusite

Andalusite is a metamorphic mineral and a strongly pleochroic gem material.
Fossils

The Unsung Mineral Hero - and the commodity upon which almost everything is built.
Rocks

Talc is a soft mineral used in cosmetics, paper, paint, ceramics and many other products.
Wall Maps

Wall Maps - Wall maps of the world, continents, states and the USA.
Birthstones

Birthstones are gems assigned to the month of a person*s birth. They are popular gifts in the U.S.
Largest Earthquake

Crater of Diamonds - The only diamond mine in the world where you can be the miner.
Hardness Picks

Gemstones - Colorful images and articles about diamonds and colored stones.
Gifts That Rock

Gifts That Rock - What are the most popular gift items in the Geology.com store?
Gems from Space

Extraterrestrial Gems - A number of materials from space are used as attractive gems.
San Andreas Fault

What is the San Andreas Fault? Map, photos and description of the fault.
Plate Tectonics

Plate Tectonics - Articles and maps about plate tectonics and the interior of Earth.
Diamonds

Diamonds - Learn about the properties of diamond, its many uses, and diamond discoveries.
Fire Opal

Fire Opal is a transparent to translucent opal with a yellow, orange or red background color.
Rhyolite

Chalcopyrite - The most important ore of copper for over five thousand years.
Obsidian

Obsidian - the volcanic rock that cools so quickly that it becomes a natural glass.
Cave of the Hands

Cave of the Hands is a cave where ancient people painted hands about 9000 years ago.
Lab-Grown Diamonds

Lab-Grown Diamonds? What are they? Can people really make diamonds? Are they real?
Mineral Hardness

Meteorites - Rocks that were once parts of planets or large asteroids.
The Brewery Rock ?

The Rock Used to Make Beer - Geologists are beer experts and should know about this rock.
Types Of Eruptions

Types of Volcanic Eruptions - A description of the most common eruption types.
Ruby and Sapphire

Ruby and Sapphire are the 2nd and 3rd most popular colored stones in the United States.
Quartzite

Quartzite is metamorphic rock formed when sandstone is subjected to heat and pressure.
Geology Tools

The Green River Formation is one of the most famous rock units in the world for its fossils.
Earthquake Maps

California Earthquake Maps - A collection of isoseismal maps for earthquakes in California.
Ilmenite

Ilmenite - The primary ore of titanium and source of most titanium dioxide.
Volcanoes

Volcanoes - Articles about volcanoes, volcanic hazards and eruptions past and present.
Opals

Pictures of Opal - A collection of different types of opal from all around the world and Mars too!
Teacher Resources

Morganite is an orange to pink gemstone, a variety of beryl, that is growing rapidly in popularity.
Rare Earth Elements

Largest Hurricanes Are they determined by wind speed, value of damage, most deaths?
Copper

Copper is a metal used in coins, electronics, pipes, wiring, motors, alloys and many other products.
Ethiopian Opal

Ethiopian Opal - The new opal heavyweight that might give Australia a run.
Bear Attacks

Bear Attacks - Knowing how to react to a bear encounter or attack could save your life.
Uses of Marble

The Uses of Marble are numerous and diverse. You will be surprised by how it is used.
Rocks on Mars

Rocks on Mars Many of the rocks found on Mars are not very different from Earth rocks.
Rhodochrosite

Rhodochrosite - a manganese mineral used as an ore, a pink gem and an ornamental stone.
What is Geology?

What is Geology? The study of Earth materials, structures, processes and life over time.
Homeowners Insurance

Homeowners Insurance might not cover earthquake, hurricane and other geohazard damage.
Mineraloids

Life on Europa (a moon of Jupiter) could exist in a salty ocean below its frozen surface.
Shale

Shale - The rock that has quickly transformed the oil and gas industry.
Gold Pans

Zircon is the primary ore of zirconium and a gemstone that is available in many colors.
Geology Books

Geology Books - A variety of books for reference, field trips, reading and more.
Types of Maps

Types of Maps - Explore some of the most popular types of maps that have been made.
Petrified Wood

Petrified Wood is a fossil that forms when silica replaces and infills the cavities of wood.
Storm Surge

Storm Surge can be the most damaging and deadly aspect of a hurricane.
Spatter Cones

Charoite is a purple silicate mineral, found only in Russia, used as a gem material.
Labradorite

Labradorite is a feldspar mineral that sometimes exhibits an iridescent play-of-color.
E.T. Volcanoes

Solar System Volcanoes - Earth is not the only location of volcanic activity.
Fool*s Gold

Fool*s Gold is a name used for pyrite when its brassy color fools people looking for gold.
Rock Tumblers

Rock Tumblers - All about rock tumblers and rock tumbling. Read before you buy a tumbler.
Mount Etna

Mount Etna - The most active volcano in Europe continues an eruption that started in 2001.
Mineral Luster

What Is Luster? Luster is the light-reflecting characteristics of a mineral specimen.
Turquoise

Turquoise - A bluish-green gem material that has been used for over 6000 years.
Debris Flows

Sand from Around the World . A photo gallery showing the diversity of the material we call "sand".
Strawberry Quartz

Strawberry Quartz is a red to pink quartz with inclusions that look like strawberry seeds.
The Acid Test

World Record Lightning - this lake has more lightning than any other place in the world.
Fee Mining

Dig for Gems at dozens of sites across the United States. Keep what you find at most locations.
Helium

Helium is a byproduct of the natural gas industry. Its most important use is in MRI.
Canary Islands

Where Are the Canary Islands? Off the northwest coast of Africa, 60 miles west of Morocco.
Waterproof Paper

US Diamond Mines - Did you know that diamonds have been mined in the United States?
Ant Hill Garnets

Ant Hill Garnets - tiny gems that ants haul to the surface and discard on their anthill. Honest!
Peridotite

Peridotite is a chromite host rock, a source of diamonds and a possible carbon dioxide sink.
What Is The Moho?

What Is The Moho? The Mohorovicic Discontinuity is the mantle/crust boundary.
Geodes

Geodes look like ordinary rocks on the outside but can be spectacular inside!
Tanzanite

Tanzanite was unknown until a few decades ago but it has erupted into wide popularity.
Great Lakes

How did the Hawaiian Islands Form? The power of a moving plate over a stationary hot spot.
Misconception

Sliding Rocks Mystery - What causes these rocks to slide across a playa in Death Valley?
Cinnabar

Cinnabar - the only important ore of mercury. Used in pigments until its toxicity was realized.
Mineral Rights

Mineral Rights - Who owns the minerals under your land? Who wants to buy them?
Crystal Habit

Crystal Habit is the external shape displayed by a crystal or an aggregate of crystals.
What is LNG?

What is LNG? Liquefied Natural Gas. The gas is condensed into a liquid for efficient transport.
Lightning Strikes Map

Corundum is the third hardest mineral. It is also the mineral of ruby and sapphire.
Great Rift Valley

The East Africa Rift System - The extensive fault system that is tearing Africa apart.
What is a Maar?

What is a Maar? The second most common volcanic landscape feature on Earth.
Azurite

Azurite - Used as an ore of copper, a pigment, ornamental stone and gem material.
Tallest Mountain

Tallest Mountain - Everest has rivals in tallness, altitude and distance to the center of Earth.
American Gemstones

Mined in America - Small mines in the United States produce a diversity of beautiful gemstones.
Tourmaline

Novarupta - The most powerful volcanic eruption of the 20th century occurred in the U.S.A.
Map of the Oceans

Troglobites are creatures that have adapted to a permanent life in the darkness of a cave.
What is a Geyser?

What is a Geyser? Photos and information about geysers in many parts of the world.
Uses of Gold

The Many Uses of Gold - Unique properties make gold one of the most useful metals.
Soapstone

Soapstone is a metamorphic rock with properties that make it suitable for a variety of projects.
Gem Silica

Gem Silica is a blue chalcedony colored by copper. It is the rarest and most valuable chalcedony.
Rock Art

Rock Art - People have been marking on rocks for thousands of years.
Volcanic Explosivity

Volcanic Explosivity - Rating volcanic eruptions based upon the volume of tephra ejected.
Watch out for Ticks!

Ticks are a problem for geologists in some areas. Learn to recognize and avoid them.
Hurricane Names

How Are Hurricanes Named? There is a plan for naming tropical storms.
Utica Shale

Utica Shale is a major source of oil, natural gas and natural gas liquids in PA, OH and WV.
Citrine

Citrine is the transparent variety of quartz with a yellow to orange to reddish color.
Greatest Ocean Depth

Angel Falls in Venezuela is the tallest waterfall in the world - it is 3212 feet tall.
Spinel

13 Gemmy Facts About Spinel - Is spinel the world*s most overlooked gem?
Fireworks & Minerals

The Science of Fireworks Learn how the colors and shapes are created.
Hematite

Hematite - The most important ore of iron. A source of mineral pigment since prehistory.
Hand Lens

Range of Bear Species - Where you might encounter different types of bears.
What Is Earth Science?

What Is Earth Science? The study of Earth and its neighbors in space. Learn more!
Underwater Volcano

Hawaii*s Next Island could be growing in the Pacific Ocean right now. Its name is Lo*ihi.
The British Isles

Colored Diamonds are diamonds with a noticeable body color. They can sell for over $1M/carat.
Chalk

Chalk is a variety of limestone formed from fine-grained marine sediment known as ooze.
Mount Vesuvius

Cinder Cones are the smallest, simplest, and most common type of volcano.